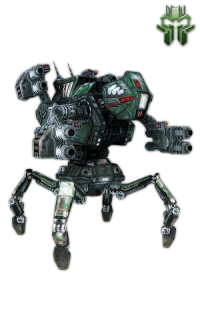 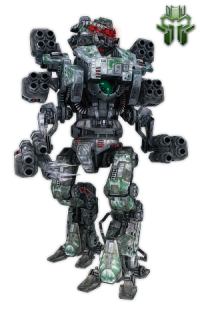 Earth’s closest analogy to the Ictus are the dark assassins of medieval Catholic church - secretive, plotting, humble, and terrible when met in anger. The “touch” of the Ictus is something feared by the Nuimqol and Thelodica equally, and even Syndicate Agents who control the Ictus say that a certain chill sits in their bones for days after.

Ruthless, methodical, merciless, unyielding - these are the hallmarks of the Gropho, one of the largest expressions of the Pelistal Empire’s strength. Although not the ultimate power in the Pelistal Empire, no Nian - Theolodican or Nuimqol - dismisses the power of the Gropho’s fusillades. Even the Gropho’s masters recognize the power of their subjects, and are mindful of it, as a kennel owner is of its most dangerous dog. 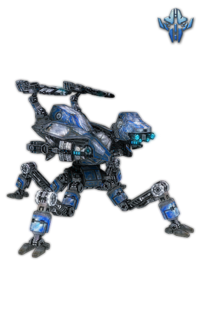 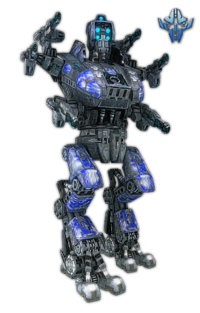 At first the Nuimqol were overwhelmed by the sheer numbers the Pelistal Empire could unleash - rolling tides of endless missile-spewing Castels. In the Yagel, though, the Nuimqol found a way to hold their own, so long as they weren't pinned into a major engagement. Capable of enough speed to strike a Pelistal army and escape, but enough firepower to take a piece of the army home with them, the Yagel are one of many thorns in the side of the Pelistal giant.

The Union’s Cameleons were the first bots to seriously employ sensor-disrupting technologies as a main combat platform. Coupled with the extremely dangerous close range weapon systems that the Nuimqol can bring to bear while their opponents re-acquire their targets, these small bots spell significant hardship for any Pelistal forces they may meet.

Nuimqol Arbalests represent the undersized brawlers of the Union’s effort. They may lack the glory of the Kain, but they are more than capable combatants in their own right, representing the largest threat to the Pelistal Empire’s swarming Castels.

It is said that there are two things the Pelistal’s enforcer, the Tyrannos, fears - the corruption of the Ictus, and the wrath of the Kain. The Nuimqol Union developed the Kain after a series of engagements in which the Empire was able to hammer down the Nuimqol with brute force; the Kain was their answer. Fast enough in crossing broken terrain to beat the Pelistal’s missile advantage, and violent enough at close ranges to crush the Pelistal’s shields, the Kain has, since its arrival, been a markedly equalizing - if not destabilizing - influence in the war between the Union and the Empire.

When the schism between the Nuimqol and the Pelistal first emerged, it was the Vagabonds that kept the Nuimqol alive. The Vagabond commanders first devised the skirmish tactics that now drive the Pelistal to a fury, and Vagabonds led the creation of the Kain. Even the design of the Vagabond itself shows the tendency towards flexibility and improvisation in their nature, and it is that nature which has led the Nuimqol to overcome great odds so far.

The Mesmer is an exception to the standard rule of the Nuimqol and their speed-and-skirmish methodology; it is a heavy platform designed for trading punches with foes at close or long range, and doing so with authority. While the Union does not yet have sufficient numbers of the Mesmer to deliver a truly telling blow to the Empire, both the Pelistal and the Thelodica are watching with interest to see whether the Nuimqol truly invest in this potentially devastating platform. 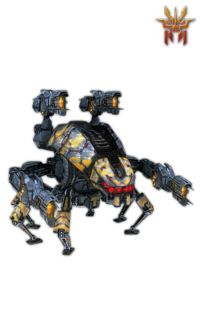 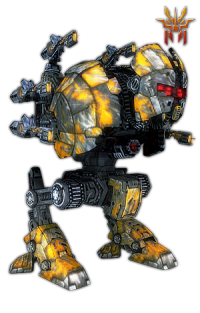 Every commercial operation has a branch whose job it is to get things done smoothly, regardless of the means, and the Thelodica have the Intakt. Rarely does the Intakt commit itself to close combat; rather, it utilizes its suite of electronics designed to weaken the targeting speed and strength of its foes, and watches from a safe, clean distance as its legions of Prometheus and Baphomet handle the dirty work.

Recognizing the impressive success of the Nuimqol Arbalest, Thelodica quickly adopted the assault platform with its own design: the Baphomet. While not as swift as a Nuimqol platform, it boasts an armament that would make a Union bot cringe. The Baphomet represents the Thelodican ideal of combat perfectly: move swiftly, strike hard, and fade away.

The Zenith caste represent the Thelodican ideal: all things with efficiency, work an angle and make sure to hedge the margin. Their combat style is no less so: they stand back and direct things from the safety of their dampening technologies, allowing them to expend far less expensive resources than themselves on the road to victory. Both the Pelistal and the Nuimqol have come to respect the cool calculations of the Thelodican Zeniths, but neither side wants to become too heavily entangled: even other Thelodica know that you don’t want to owe the Zeniths a favor.

Any doubt about the strength and staying power of Thelodica as one of the major nations of Nia can be resolved with one look at a Seth. A sturdy juggernaut wielding light and flame like a demigod, the Seth is the Thelodican answer to the Mesmer, should the Nuimqol ever become too dominant on the strength of their mech and heavy mech weapons against the Pelistal. While still a machine focused on selling a service, the Seth are very well-paid to remain loyal to their Thelodican masters. 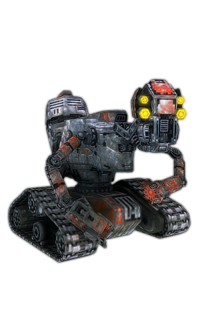 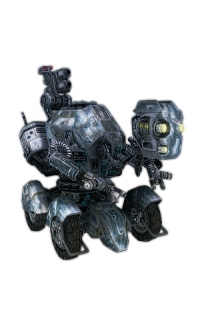 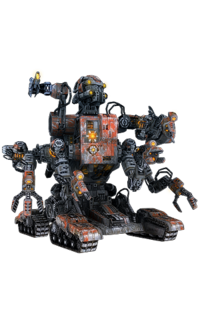 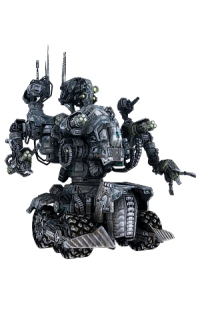 While the Niani Industrial Trust as a group is engimatic, even fewer understand the Argano. Lacking the Termis’s efficiency or the Riveler’s ravenous hunger, the Argano nonetheless contributes well with its small stature. It will never be the most rapid of the mineral harvesters, but Agents who drive the Argano are known for determination and hard work for a reason.

Few claim to understand the Industrial Trust, or why it works equally and without complaint in all three nations. Fewer still understand the Laird - while the Gargoyle disappears into the woodlands, and the Symbiont will intensely study a flower, the Laird’s simple work ethic shows as it wanders from the tiniest patch of flora to another, harvesting what can be had while gently making sure not to destroy the plant, even as a Mesmer’s shattered remains stand five meters away. In a world torn apart by war... the Laird quietly tends the gardens.

The Sequer struggles daily with its place on Nia. Only useful as a carrier of goods, Sequers are well aware that within the ever-more-efficiency-seeking Niani Industrial Trust, only its cheap and disposable cost allow it to compete with the working juggernaut that is the Lithus. So obsessed is the Sequer with remaining legitimate that, unattended and unordered, one can actually witness the bot enter a semi-powered-down status, almost making the little transport worker seem sad or resigned.

Do the Niani Industrials know or care of the war they are supporting? Are they simply automatons of low intelligence, or are they the ultimate puppeteers of a master plan only the Industrial Trust perceives? Does the slumbering giant of Nia’s “fourth faction” exist? The Termis represents this mystery perfectly: a tireless worker, communicating only in regards to its trade, caring nothing for the results of its work - and yet, never ceasing to work as efficiently as it can, for what goals and motivations, no one knows.

While any military-minded individual might question the memory integrity of any bot that spends its day frolicking in the woods, the Gargoyle is notable for the amount it brings home at the end of that day. More effective than the Laird, and far easier to construct and maintain than a Symbiont, the Gargoyle is judged as a reasonable middle ground for anyone needing the bounty of Nian flora.

The Riveler is the Industrial most held in respect by the combat bots of Nia. Capable of gathering the raw materials of war more effectively than any other platform, their cost to build and maintain still cause them to be viewed as an indulgence, rather than a necessity. All the same, a group of Rivelers harvesting a chunk of terrain has an impact like no other, and every Nian nation respects that bottom line. If you can afford its services, the quiet effectiveness of the Riveler is without peer.

If you ever wish to see a Nian look puzzled, observe one examining a Symbiont. No less massive than the Riveler, and no less effective at its job, the Symbiont still ultimately spends a great deal of time in what humans would term as “picking flowers.” It is not unusual for a Symbiont to pause in their mass-harvesting of huge quantities of flora to regard a particular flower or plant with a fascination, carefully avoiding damaging it, and then moving on with its job. To other Nians, this is yet further proof of the strange, alien, and generally bizarre nature of the Nian Industrials.

The Lithus occupies a strange niche in the Nian hierarchy - that of an industrial bot that is left alone. These ponderous behemoths complain little and communicate less; while their role is not the glamour of the fighting corps, nor the grunge of the harvesters, they know their position as the invaluable movers of massive loads. The Seth, Mesmer, and Gropho do not move out of the way of the Lithus, but they have no desire to step in the way of one working. No one understands the Lithus and its ways - but the Lithus does not expect them to, either.